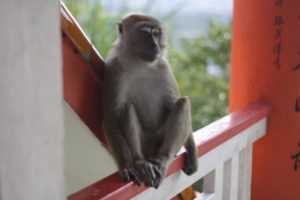 The Terminale S students in geologists’ shoes, seraching for the history of Ipoh…

How can the city of Ipoh help us understand the connection between the local geological resources (tin, iron, limestone, etc.) and human occupancy?

Ipoh is a city located in the Kinta Valley close to the Sungai Perak River and has long benefitted from this strategic position. The city was created by Chinese workers who had come to make a profit off the tin mines, thus becoming the first tin producer in the world in the 19th century. Now, the city has a population of about half a million. Our trip was divided into five stages: visiting Perak Tong, discovering the Tambun outcrops, visiting the Kek Look Tong cave and its garden followed by the treasures of the geological museum and finally, on the next day, a rafting ride on the Kampar River.

Perak Tong is a Buddhist temple located in the Gunung Tasek caves north of Ipoh, where we had the opportunity to see wonderful statues. The most memorable moment of this stop, however, will remain the endless fifteen-minute walk up stairs so steep it felt like we were walking vertically, and which left us with very sore muscles the next day. It was worth it though, as we thus had the chance to have a breath-taking panorama of the region!

II. Looking for clues in the Tambun hills:

Once in the Tambun hills, in the first outcrop, we saw rock paintings dating back 5,000 years. These gave us information on the fauna and flora of that period. We then studied the rock making up the cave and noticed it possesses the following characteristics: brown colour, not friable (coherent), lack of crystals or fossils, can be scratched with a copper coin and effervescent in the presence of acid (HCl). It is limestone and therefore, sedimentary. We also identified an inverted rift and an orogeny. These two distortions of the rock are proof of compression: as there was no classic rift and we found sedimentary rocks as opposed to volcanic rocks, we dismissed the “rifting” hypothesis.

III. Continuing our research in  Kek Look Tong with a live explosion!

The teachers tasked us with finding the various types of concretion -stalagmites, stalactites, fistulous stalactites, calcite, draperies, columns, etc.- inside the cave. These concretions and the cave formed thanks to the dissolution of the limestone by acidic water (rich in carbon dioxide). Calcium was subsequently released and carried by the water. Finally, the water evaporated, and the calcium precipitated.

Eventually, all this information proved to us that the second hypothesis was incomplete. We thus came to the conclusion that the geological history of the region was divided into three major phases: during the Palaeozoic age, a plateau of sedimentary rocks formed at the bottom of an ocean. Then, during the Mesozoic age, a succession of compression events (subduction) led to the formation of granite plutons and distorted the limestone plateau. Last, the limestone -mostly- eroded, leading to the creation of karstic landscapes. As for the erosion of the granite, it gave other resources such as tin, iron, etc. The region’s geological resources are not insignificant as they hold a history of increasing exploitation since the Second World War. Indeed, in those days Japan had taken control of this part of Asia and exploited the large iron veins -among other things. Said exploitations are still running today, particularly the limestone ones as it is an important resource. In fact, we even witnessed the live explosion of one side of the hill opposite the cave! Such practices are both an economic resource and a threat to the region’s splendid landscapes.

There was much laughter in the rafts the next day, with a good state of mind and, more importantly, team spirit…but sadly no cameras!

We won’t forget these two December days any time soon!