Languages in the AEFE network 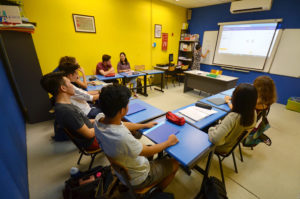 French education abroad is based on a multilingual and multicultural education. From kindergarten to high school, students learn and interact with multiple languages ​​and cultures. Students, according to their options, have the opportunity to choose a linguistic path that is adapted to his personal project. The school offers a great opportunity to develop and enhance the knowledge of these languages ​​and cultures.

The languages offered by the French educational institutions abroad has become a major factor in their attractiveness and development. It is adapted to the mobility of students and families through quality education that takes into account the evolution of our society.

Language teaching is, within the AEFE (Agency for French Education Abroad) network, one of the favoured media of our specific educational excellence and so, it must convey our capacity for innovation and experimentation. It is thus crucial that the network be creative and relevant in its implementation of language teaching and intercultural education. These two aspects must necessarily remain inseparable, pursuant to the scientific progress in this area as well as the educational policy aims defined by the European and international conferences and agreements, with which the AEFE’s strategic orientation is in line.

Language teaching is one of the main approaches of all the schools belonging to the AEFE network.
Lycée Français de Kuala Lumpur Henri Fauconnier benefits from an hourly exemption enabling it to implement advanced English classes.

In primary school, LFKL is equipped with innovative and very efficient measures for teaching English which leads to an early and solid language learning, quickly paving for our students the way to multilingualism. Said measures also enable them to study in Anglo-Saxon universities later.

Pursuant to the AEFE’s educational departments’ circular, LFKL has implemented since the beginning of the school year 2013 reinforced measures for language teaching, particularly English teaching in primary school and including language as well as language integrated classes (CLIL: Content and Language Integrated Learning. A class given in a foreign language: for example, science in English).

The teaching of the English language is divided to reach a weekly amount of 4 to 7 hours, from preschool to CM2, depending on each pupil’s language profile and mastery of the French language as the latter remains the main language at school. In the first half of the program, the pupils work in small groups (of up to 12-13 pupils) according to the Common European Framework for Languages. In the second half, they are placed in more important situations through the teaching of other subjects in English (CLIL).

Foreign languages are taught as early as preschool through educational activities focusing first on speaking then, gradually, on writing during the 2nd cycle.

Language teaching is done in small groups (of up to 13 pupils) from the last year of preschool onwards. These language groups are heterogeneous, which allows everyone to progress more rapidly and focus particularly on beginners while endeavouring to help pupils whose mastery of English is already good to reach a high level. At the end of the school year, all CM2 pupils sit for internationally recognised English language certificates awarded by Cambridge Exams. Each pupil thus obtains a certificate, from A1 to B1, upon finishing primary school.

Initiation to Mandarin (upon teachers’ proposal): 1 hour per week.

Initiation to Mandarin (upon teachers’ proposal): 1hour per week.

Pupils attend regular classes according to their age group and also receive extra-French classes in order to gain a good command of the French language.

Students participate to an “integration class” for one and a half hour every day (7 hours and a half per week) during school time, in a group of 12 students maximum, with a teacher who is specialized in teaching French as a foreign language, in charge of the group. These hours are not spent with the other students of the ordinary class but are specifically designed for non-French speaking children according to their language level.

Students take part in the ECA (Extra Curricular Activity) “French as a foreign language” twice a week after school (compulsory attendance with an additional cost for the families) 4 hours per week.

Students also follow the “linguistic pathway” with other pupils from their class, in French language (1hour per week).

You can find more information (how to apply, the language support) about our French integration program here.

If students master both English and French languages well, they have the opportunity to join the Malay or Mandarin class once a week for an hour, according to the teacher’s recommendation.

Every year our primary and secondary school students have the opportunity to take the DELF (Diplôme d’Etudes en Langue Française) exam.
The DELF certification is a French foreign language diploma issued by the French Ministry of Education. It is valid for life and is recognized worldwide. This diploma validated by the school, provides a proof of proficiency for education purpose, to enter French Universities (DELF B2 and above) or for work purposes. It allows students to study, work and immigrate in French-speaking countries.

This year, our middle school and secondary school students from 4ème and 2nde all successfully passed the DELF exam.

At the LFKL, an early English program is offered to children in kindergarten through educational activities in different group levels.
In secondary school, English classes are divided into two levels: ESL (English as a Second Language) and ELA (English Language Arts) according to each student’s language proficiency. English teachers follow the Cambridge program, allowing students (from CM2, 3ème and 1ère) to take language exams every year and receive international language certifications such as the Cambridge exam and the IELTS.

In 2018, our final year students all managed to pass successfully their IELTS exam.

The IELTS (International English Language Testing System) is designed to assess the language ability of people who want to study or work where English is the language of communication. It is recognised and accepted by over 10,000 organisations worldwide, including universities, employers, professional bodies, immigration authorities and other government agencies.
Each section of the IELTS (reading, listening, speaking, and writing) has a score that varies from 0 to 9 points, every grade corresponds to a specific level.
At the end of their final year, students are expected to score 5 points on the scale from 0 to 9. All of our students have acquired a minimum of 5 points, which is equal to the B2 level of the Common European Framework Reference.

More than 70% of our students reached the levels C1 and C2 (scoring 7 points at the IELTS). Some attained 9 points in different section of the test (reading, listening).

A new International Section is now available at the French school

Starting in September 2020, elementary school students from year 1,2,3 will have the opportunity to apply for the International Section which features a higher ratio of classes in English (30%) and a greater exposure to Anglo-Saxon literature and culture.

This section will lead pupils to a French Baccalaureate diploma with an “international British option”, that is highly recognized by universities in English speaking countries. You can find more information about the this program using this link.

The Diploma of Spanish as a Foreign Language (DELE) is an official title that certifies the Spanish language degree of linguistic competence, granted by the Ministry of Education, Culture and Sport of Spain.
Last year, 20 of our secondary students (from 1ère to Terminale) all passed their DELE certification A2-B1 exam successfully.

The Youth Chinese Test (YCT) is an international standardized test of Chinese language proficiency for primary and middle school students. It evaluates their use of Chinese as second a language in their daily and academic lives.
YCT is divided into writing and speaking tests, which are independent to each other. The writing test consists of four levels, namely, YCT (level I), YCT (level II), YCT (level III), and YCT (level IV). The speaking test consists of two levels, YCT Speaking (Primary Level) and YCT Speaking (Intermediate Level).