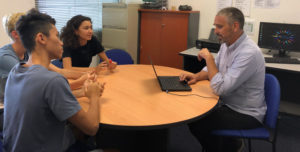 Personalised mentoring is one of the priorities of Lycée Français de Kuala Lumpur.

The Parcours de découverte des métiers et des formations (PDMF – Discovery of professions and study courses plan) starts as soon as 5e up until Terminale. During this time, various activities are offered to students, parents and educational teams. The aim is to help students review their interests, motivations, capacities and ambitions by providing them adapted information, to help them integrate universities and find their future professional path. In high school, the focus is on what happens after the baccalauréat to prepare students to successful studies.

You can contact the academic guidance counsellor, Mrs Morgane FORT, at:
conseiller.orientation@lfkl.edu.my

To each level its discoveries
Documentation available

The pupils discover professions and their characteristics, research them and discuss through workshops and productions.

Discovering the training courses aims at familiarising each pupil with the various study courses while linking them to the professions. Project-making workshops take place in each class.

The 3e class is an academic choice threshold. The pupils and their families have to face their first choice upon entering upper secondary school. Several activities are offered all year long:

This is the defining class. The students must make their first academic choices in view of the Première-Terminale cycle and design a first academic choice and study project. To help them, they will participate in various activities, especially the discovery of the corporate world through an internship week.

Days of exchanging on professions

Following the actions taken in Seconde, the students will have to think about their choice of study course and determine their higher studies wishes. To do so, several activities are offered:

First part of the baccalauréat examination

This last stage prepares for higher studies. All year long, the educational team offer the students various actions to mentor them into integrating higher studies and succeeding at them.

See the Studying in France and Studying abroad sections

Structure of higher education in France

What studies after what Bac

AEFE document: Choosing the baccalauréat stream is done at the end of Seconde but no choice is yet irreversible: the new format of the upper secondary school allows for more fluid study courses thanks to link courses. These make it possible to change stream (subject to the headmaster’s approval). The three general baccalauréat stream, i.e. the economic and social sciences (ES), literature (L) and scientific (S) streams retain some specificities but also evolve towards subject intermingling. Their curricula are therefore characterised by:

The technological and vocational study courses, equally interesting, are offered in some French schools abroad and everywhere in France (metropolis and overseas territories).

What to do after each Bac: see the ONISEP leaflets

Many registrations to higher education in France are done through the APB –Admission Post Bac– procedure; some are done directly with the school, through an application file or a competitive entrance exam.

Private independent (i.e. not under contract with the government) courses

AGORA is a website used for students, alumni and educational teams of French schools in Asia-Pacific and Near East – Middle East – Indian Peninsula.

The purpose of AGORA is to gather important education information to guide alumni and future alumni of French schools in Asia-Pacific and Middle East – Middle East – Indian Peninsula areas.